Adrius au Augustus, better known as The Jackal, is the second son of Nero au Augustus, Mustang's twin brother, and a Gold of the Martian house Augustus. His epithet, 'The Jackal', was given to him by Lilath during the war games in which he turned to cannibalism from months of starvation while trapped within mountain caves.

Adrius is a complicated character. He sees little value in anything other than achieving his goals, yet he still longs for his father's approval.

Adrius, like his sister, is shown to possess a high intellect and a penchant for politics. He is an adept deceiver and planner, often one step ahead of his opponents and willing to make substantial sacrifices as he sees fit. However, he is known to be volatile and at times emotionally driven rather than logically, unlike his sister. His hubris has been his greatest weakness on multiple occasions.

Adrius does not have the same loyalty to his family as his sister does. He is only loyal as long as it serves him some kind of reward, which for much of his life was the possibility of his father's favor. For this reason, he kills his older brother Claudius[1] and eventually his father, Nero. Adrius denounces morals as hypocritical and at one point Virginia comments that he doesn't see people as people but just sacks of flesh at his disposal.[2] Despite this he seems to crave affection and approval, often desiring it from his father whom he idolized for most of his life. Adrius is deeply angered by his father preferring a "carved up red" for a son than himself.

He's also shown to be very obsessive over people who have wronged him and to those he wants to have approval from. This is shown from how after Adrius captures Darrow after the events in Golden Son, and tortures him for a year in his own palace before giving him to the Sovereign. He's also shown to keep and protect what he's entitled to from his name as he claims he would never use the nukes on Mars but was willing to burn Luna to gain the rank and power of Sovereign from Octavia.

Slightly oily blonde hair. Has a stump on one of his hands after he sawed it off to escape from Darrow during Red Rising.

Quickly brought House Pluto to the top of the game. Tried to trap Darrow at Castle Jupiter but fell into trap of his own. Ran away after killing Pax. Caught by Mustang and ended up bound and gagged naked. After his house fell, he attempts deception against Darrow, which failed and resulted in Darrow plunging his blade through his hand to trap him. In response, he escapes after sawing of his own hand, leaving behind a stump. Towards the end of the institution's term, he is recaptured by Mustang, which secures Darrow's victory as ArchPrimus.

Started business in the interim. Controlled 60% of communications/media. Since he accepts his wounds proudly, he refused to have his hand fixed and a stump remained where it used to be. He manipulated events to his advantage, including one in which he paid Karnus au Bellona to seduce the girlfriend of Claudius au Augustus, which then led to a duel challenge where Claudius was killed. This was done in order for Adrius to try to gain favor from his father. He then formed a brief alliance with Darrow until he found out that Darrow was a red. Killed Leto. During Darrow's triumph, he, along with Roque au Fabii and Antonia au Severus-Julii, massacred several high profile Golds, including Lorn au Arcos as well as his own father.

Took over his father's position as ArchGovernor of Mars. He interrogated Darrow for three months, then kept him in solitary in a box under his dining table for nine months. He delivered threats and warnings to Darrow and personally administered the execution of Narol. At one point, he forces Cassius to cut off Darrow's sword hand in revenge for Darrow taking Adrius' hand during their time at The Institute. During Darrow's coup against The Sovereign on Luna, he attempted to launch an all-out explosion to decimate Luna and kill Darrow's men along with all of Luna's inhabitants, but the plan failed when Darrow pulled out his tongue to silence him. Even though the plan failed, his attempt still killed millions of civilians. After Mustang's takeover as Sovereign, he is publicly executed.

Adrius was fond of his sister during his youth, and was said to have created mazes for her to play with during their time together.[3] He eventually became more antisocial and unpredictable as they separated, with his desire of identity and recognition overwhelming him, and this drove them apart.

Adrius has a rocky relationship with Darrow. He sees Darrow as a rival, a worthy opponent and also a threat to his interests. His pride causes him to lose his sense of utility, resulting in him refusing to repair his arm, as well as imprisoning and torturing Darrow instead of having the latter executed, as he sometimes makes irrational decisions based more on emotion than utility. Having Darrow imprisoned ironically lead to his own downfall. In doing so, the imprisonment carved a much wiser adversary in Darrow and gave him the chance to make the historic speech of the Phobos Address that drained Adrius's resources and distracted him from Darrow's true purpose. It is implied that he is obsessed with Darrow.

Adrius considered Darrow to be the only person that truly understood him, and viewed them both as being similar people.

Adrius desired to be loved and recognized by his father, and went to lengths to showcase his talents and achievements, but all without avail due to Nero's favoring of Claudius and later Darrow. This culminated during Darrow's Triumph, where he publicly murdered his father for refusing to give him the affection he felt he deserved.

Revered him. Feared him. Admired him. Hated him. Killed him. 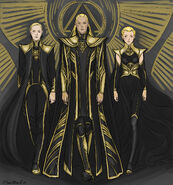 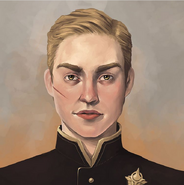 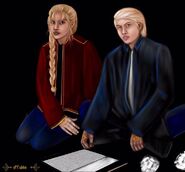 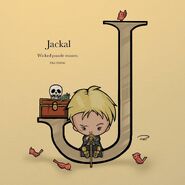 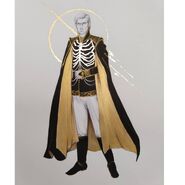 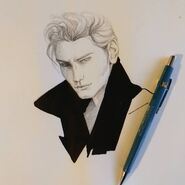 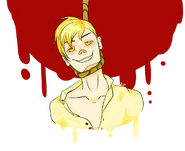 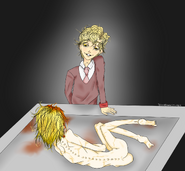 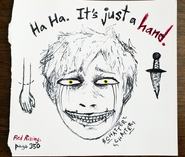 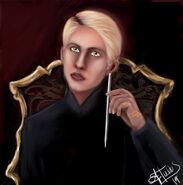 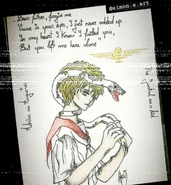