Aja au Grimmus is the Protean Knight and the chief bodyguard of Octavia au Lune, the reigning Sovereign, to whom she is fiercely loyal. She is the daughter of the Ash Lord. She was trained by Lorn au Arcos and is supposedly even stronger than him. She is bitterly opposed to Darrow's cause, and murdered Quinn and Ragnar Volarus, among some of Darrow's other allies, in an attempt to stop him.

Met Octavia au Lune and became one of her Furies as well as one of the Olympic Knights. She was treated like a daughter by Octavia.

While Darrow considers her to be a sadistic beast, and many others find her to be amoral and cruel, her former mentor Lorn tells Darrow that Aja has her friends, her families, and her own people to protect. She is immensely loyal to Octavia, who treated her like a daughter, willing to risk her life to defend her against immense odds, and is furious and saddened by her injuries.

Tall and powerful, with large hands. She has dark skin and extremely white teeth.

Hinders House Augustus's attempt to escape, but prevented from doing so because Lysander was used as leverage. Kills Quinn nonetheless. Arrived on Europa with Tactus and a group of Praetorian guards to make contact with Darrow/Lorn. Though the entourage was wiped out by hidden grenades, she escapes by jumping into the ocean and swimming away, returning to the Sovereign's side in time for the war.

As Darrow, Mustang, Ragnar and Holiday attempt to recruit the Obsidians for the Rising, Aja and Cassius intercept them and shoot their ship down before they can reach the Obsidians. During a brief skirmish, Aja mortally wounds Ragnar and escapes.

As the Protean Knight and Bodyguard of Octavia, she makes a final stand defending Octavia from Cassius, Mustang, Darrow, and later Sevro. She is killed by Sevro. 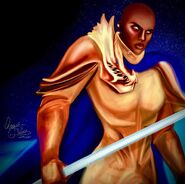 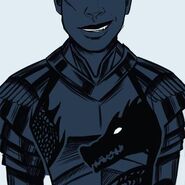 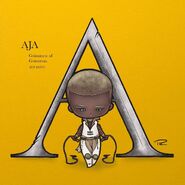 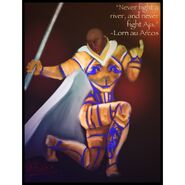