Ajax is the only child of Aja and Atlas. Their coupling was described as a "loveless genetic union," orchestrated by Octavia au Lune as a genetic experiment to combine Aja and Atlas' genes. Octavia was initially disappointed with the outcome, as Ajax was an unimpressive child. He was mocked as a child for not living up to his parents' legacies.[1]

Ajax is described as having dark skin and "violent amber" eyes. He is taller than Aja was and has "powerful shoulders." On his armor he wears the pelt of a pearl leopard.[1]

Prideful and arrogant, Ajax must always get his way and will not stand by as his honor (perceived or otherwise) is challenged. He is quick to act and react, unafraid to make his emotions heard, but knows when and where to hold his tongue.

At the start of Dark Age, he is both the Storm Knight and a full Legate infantry commander.[1] He and Kalindora au San are there to greet Lysander au Lune, Diomedes au Raa, and Seraphina au Raa on the Annihilo. Ajax is initially skeptical of Lysander's identity and requires a DNA test and the answer to a question only Lysander would know before accepting Lysander back.[1] Ajax then accompanies Lysander, Diomedes, and Seraphina in Atalantia au Grimmus' holo conference where she announces that Lysander is alive and the Rim has proposed an alliance with the Society Remnant. Here, Ajax learns that Lysander was Cassius au Bellona's ward. It enrages Ajax that Lysander could have stayed with a traitor instead of returning to his family.[2]

Later, Lysander falls with Ajax in the Iron Rain. When Rhone ti Flavinius shows up to assist Lysander. Though he does not say anything, it is clear Ajax is worried about Lysander stealing power from him.

When Lysander identifies the oncoming hypercane as a result of the Storm Gods, Ajax is initially skeptical they even exist, though is forced to come around when the storm hits. He and Lysander take shelter behind a tank. After the storm passes, Ajax, Lysander, Seneca au Cern, Kalindora, Seraphina, and several other officers find shelter in the garage bay of an infantry transport. Here, Ajax suggests Lysander go shut down the Storm God and they part ways.[3]

Ajax refuses to send help to Lysander, Cicero au Votum, Kalindora, and Seraphina when they are ambushed by Darrow O'Lykos.[4] Later, Ajax sends a team of seven Iron Leopards to kill Lysander in exchange for a torchShip each.[5] He appears again during the Long Night, showing up after Darrow has retreated. Ajax and his officers head to the Mound to finish the job[6], though their attempts to kill Darrow ultimately fail. He is later seen at Lysander's Triumph.[7]

Lysander and Ajax grew up together, and were close enough to consider each other brothers. Lysander remembers Ajax as "the kind, generous brother who could never bridle either affection or fury."[1] Though now that they are older, with years spent apart, their relationship has changed. Ajax is wary of Lysander coming in and taking power and fame from him.

Ajax recounts a time when he and Lysander were visiting Magnus au Grimmus' estate in New Sparta. Ajax "looked forward to those winters on Grandfather's estate more than anything"[4] because there Lysander was not trying to impress anyone. At one point, Magnus took the both of them out hunting and told them to race back to the estate. Lysander went ahead, leaving Ajax behind despite Ajax begging him to stay. It took Ajax three days to get back on his own, and when he arrived, he was unwashed and therefore barred from eating at the dinner table. Lysander brought his food to Ajax behind the stables. However, instead of sharing it, he sat down and ate it in Ajax's presence, stating something to the effect of "you really must work on your sense of direction, Ajax". The prospect of being shown up by Lysander yet again, reignited Ajax's memory of that incident and the resentment tied to it.

Atalantia groomed Ajax into her own personal killer by giving him sexual favors in reward for killing traitors of the Society Remnant. The grooming started when Ajax was very young, and the sexual favors began when Ajax was fifteen. This resulted in Ajax becoming intensely loyal to Atalantia. She did this as revenge against Aja, whom she always detested.[8] 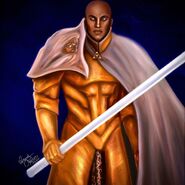 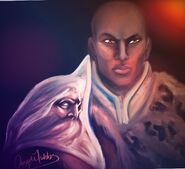