Queen of the Valkyrie

Alia Snowsparrow is the mother of Ragnar Volarus and Sefi the Quiet, among some others. To display her loyalty to the Gold rulers, she gave away all but one of her children to them as slaves. Alia kept only her daughter, Sefi, arguably the most powerful of them all.[1]

She was the Queen of the Valkyrie and leader of the Obsidians until she was decapitated by Sefi in Morning Star.

Alia was the daughter of a wanderer. She rose to prominence as a warrior by raiding other clans.[1] The day Sefi's father was taken by the Golds, Alia broke a griffin amulet in half, only to be whole again when he returned.[2]

Alia is "colossal as Ragnar, but ancient and wicked... The wind has armored her face in dead skin and calluses. Her hair is stringy and long, the color of dirty snow... On her head is a crown of black glass."[3]

At some point (likely after her rise to power), Alia learned of how the Golds lie to Obsidians and began operating in favor of the current Gold structure.

Darrow, Mustang, and Holiday meet Alia following Ragnar's death. She speaks to them not in native Nagal, but in HighLingo Aureate, which Darrow notes is "a sacred tongue, known by few in these lands, mostly the shaman who commune with the gods. Spies, in other words." Alia tells them "wicked prophets" foretold Ragnar's return, claiming a man would come with him and guide the Obsidians from the Antarctic. Alia hunted and killed seven of the people who spoke of this and hanged their bodies on a rock face. Despite their best efforts, Alia refuses Darrow and Mustang's offer of freedom. She sends them to Asgard for the Golds to deal with.[3]

When they return from Asgard with Sefi, the Valkyrie, and the captured Golds, Darrow gives her another chance to side with them and not betray her involvement with the Golds. She refuses, instead turning her attention to Sefi and claiming that Sefi betrayed their people. Sefi decapitates Alia with a razor.[4] 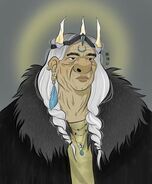 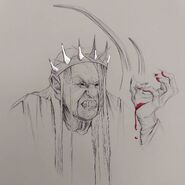