Antonia au Severus–Julii is a Praetor of the Fifth and Sixth Legions, a former classmate and rival of Darrow at The Institute, and the younger half-sister of Victra au Julii. Due to bad relationships with the Julii family on her mother's side, she occasionally used the namesake Antonia au Severus.

She is described as a poisoned apple of a woman, and proves herself to be merciless, treacherous, and opportunistic, without much loyalty or honour. She is shown to be very shallow and vain, mourning her marred face more than her dead mother in captivity. While she has a certain cunning to her, Antonia is also somewhat cowardly, fleeing from the Battle of the Jovian Moons when Roque is defeated, throwing her own side into chaos.

Antonia is part of House Mars at the Institute, but has a tenuous relationship with Darrow and Cassius. She leads her own faction in House Mars, opposed to Titus's faction and Darrow's, though she later aids Darrow in bringing Titus down. She later betrays Darrow in an attempt at a coup and joins with Cassius. However, this backfires as Darrow survives and forms his own coalition of houses with Mustang, while House Mars is besieged by House Pluto. Antonia and two others are crucified by House Pluto and are cut down by Thistle. Darrow would then seize back control of House Mars and win his year at The Institute. For her performance, Antonia is not Peerless Scarred.

In Golden Son, Antonia is present at the gala attended by the Sovereign herself. She taunts Darrow while she's there and later sides with The Sovereign and House Bellona against House Augustus. She shoots her older sister Victra in the back, paralyzing her during Darrow's Triumph. She also kills her mother and imprisons her half-sister to become sole heir to the Julii Family.

In Morning Star, Antonia aids in the torture of her sister, pouring acid on her and trying to shame her for loving Darrow when he was a Red all along. Later, she was ordered by the ArchImperator to aid Roque au Fabii during the Battle of the Jovian moons, in which she attempted to escape upon Roque's defeat, but was captured by her sister Victra, who was fighting alongside Darrow. She murdered fellow prisoner Cyriana au Tanus in an attempt to prevent her from revealing the Society's secrets, but was badly beaten by her sister Victra in recompense, her face shattered and bruised beyond recognition. Upon being freed by Cassius au Bellona, she presents herself to the Sovereign, Octavia au Lune, but is immediately executed on Octavia's orders for deserting Roque in battle. 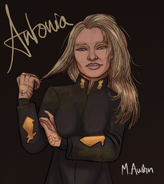 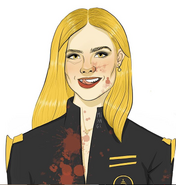 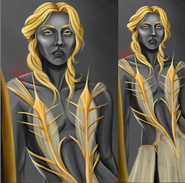 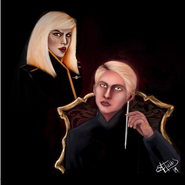