The Color system of the Society originally was a caste system created by early humans on Earth to create order when first colonizing the Moon. It is also a form of social hierarchy improved upon by the early Golds during their conquering of the Solar System. It divides Humanity into fourteen distinct "Colors."

Originally the "Colors" were native Earth human beings who simply wore colored clothes that denoted their position. After conquering Earth the founding Golds of "The Society" used genetic engineering to cause members of each Color to have hair and eyes to match their caste.

Beyond the coloring, the genetic structure of their bodies was modified to allow them to be more adept at performing their denoted tasks. Examples are Red's (miners) being smaller and squat, Obsidian's (fighters) being large and with 8, 5 or 4 fingers per hand, and Gold's (conquerors and explorers) having bone 5 times stronger than an average man. Every person's vocation is dictated entirely by their Color.

As part of the genetic engineering of the hierarchy, lowColors have significantly shorter pregnancies than pre-Color humans. Labor is induced for lowColors after a maximum of five months of gestation through the use of catalysts, sedatives, or nucleics. Only Golds and Obsidians experience full nine-month pregnancies with natural births.

In addition to the genetic engineering that gives individuals the pigment to match their castes, a certain amount of social engineering exists in an attempt to prevent the desire for social mobility. Obsidians (for example) believe Golds to be literal gods, helping to ensure their loyalty to their masters. While Reds are socially engineered to be heterosexual, family oriented, and marry and breed by age 14-16 in order to maintain and increase their labor population.

While the genetic engineering is fairly perfect, the social engineering is proven time and again to be woefully inadequate. Throughout the novels, there are very few examples of specific low-color individuals who remain loyal to Gold, given a reasonable opportunity to rise against them. Even a surprising number of Golds seem to very-easily abandon the system that has allowed them to live as gods. 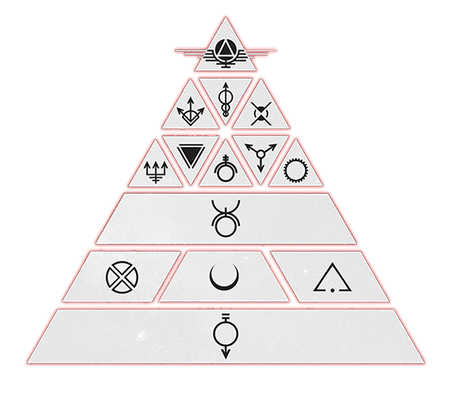 From left to right, top to bottom, the colors are:

Additionally, most (if not all) colors have some sort of elite class within it. So far only some of these classes have been revealed (as per Iron Gold). These classes are: