All of Pierce Brown's official accounts.

The Sons of Ares

Run by Pierce's sister Blair, The Sons of Ares are the official accounts for the Red Rising Saga.

HowlerLife.com is a fan-run website dedicated to all things Red Rising, primarily focusing on news.

The Howler Archives is a fan-run site that seeks to serve as a hub for all things related to the Red Rising fandom and community.

HowlerPod is a Red Rising themed Podcast run by Ben Reinert and Erin Ayers, where they read through the books, discuss recent news, perform interviews and share their thoughts and theories. 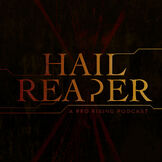 Hail Reaper Pod is a Red Rising themed podcast, produced by Catacomb Party and run by Philip, Jeremy & Mathr. They explore the book series through conversation and use creative sound design to offer immersive content to their fellow Howlers.

Words and Whiskey is a podcast covering the Red Rising Series. Releasing new episodes every Thursday. Kross, a veteran of the series takes Pj along for the ride of the series, not having yet experienced. This allows for a fun dynamic for those who have read the series previously, or to encourage new comers to join along.

Ballen Cosplay is a cosplay group based in Northern Colorado. They cosplay as many different characters from alternate fandoms, but primarily focus on Red Rising.

MandalorianMustang is an incredible cosplayer, mainly focusing on the Red Rising and Star Wars fandoms, among others.

Stitches and Sparkles is infamous in the Red Rising community for her stunning cosplay as Virginia au Augustus in PulseArmor, but also cosplays as various other characters from different fandoms, such as Ashoka Tano from Star Wars.

With a range of quizzes spanning from which Family House, Insititute House to which character would be your best friend, these quizzes are fun, unofficial content for Howlers in search of more things Red Rising.

The Playbuzz Character Quiz is a small and fun questionnaire to find out which character you would be inside the Red Rising Universe.

A Red Rising quiz on Kahoot!

The Unofficial Sons of Ares Discord Server is the largest gathering of Red Rising fans on Discord. Come and chat!

Blood Gold is a roleplaying server dedicated to exploring an alternate version of the Red Rising Saga.

The Institute of Luna

The Institute of Luna is a discord roleplay server defined around attending The Institue on Earth's moon, Luna.

Team Howler is a fan account where they post recent books they're reading, the main books being the Red Rising Saga.

r/RedRising is the subreddit dedicated to Red Rising, where fans post memes, fan art, and share their thoughts and theories on the Saga.

A sister subreddit to r/RedRising, dedicated to ranting and hating on Lysander au Lune.

A sister subreddit to r/RedRising, dedicated to ranting and hating on Roque au Fabii.

A sister subreddit to r/RedRising, dedicated to ranting and hating on Pliny au Velocitor.

Howler Legion is a blog dedicated to Red Rising, with book information, Pierce's Twitter feed, and an Institute House Quiz.

Books and Looks is a Book review channel on YouTube, that also does a lot of Red Rising themed videos.

Piera Forde is one of the few big book review channels on YouTube that constantly praise Red Rising, even getting interviewed by HowlerPod.

Where Daydreamers Go is a YouTube Channel that produces music to fit the ambiance of particular chapters within the Saga.

Planet Red Rising was a website dedicated to any and all things Red Rising. However, their Twitter is still semi-active, posting every few months or so.