Co-consul of the Rim Dominion

Dido au Raa (nee au Saud) is the wife of Romulus au Raa, Sovereign of the Rim Dominion. She led a military coup against her husband. She is featured in the Lysander chapters of Iron Gold.

Lysander au Lune says her love story with Romulus is one of "star crossed lovers who burned a city for their love" though the star seems to have "dimmed."[1]

Dido is Venusian, and is described as having a "masculine, strident face, with ridgelines for cheekbones."[1] She has graying, dark hair, gray-gold eyes, and dark eyelashes. Her eyes are described as sleepy, similar to her daughter, Seraphina's. [1]

Dido arrives at the outpost where Seraphina, Cassius and Lysander are with her husband, Romulus. She enters with an entourage of fully armed Golds including her nephew Bellerephon and several lancers. She sends them to find Seraphina, whom she had conspired with to send her on the search for the evidence about the truth behind the attack on the Ganymede Docks. She dramatically argues with Romulus, and then tells him her men are taking Io already, and she will be the "Protector" of the Rim until a new Sovereign is elected. She reveals that Seraphina did find the evidence she was looking for, and tries to arrest Romulus. She commands Bellerephon and her men to attack and kill anyone "not dragonblood." When Diomedes and Bellerephon fight, she stops them all, and Diomedes turns his hasta on her. Romulus calls him off and is taken away. Cassius and Lysander reveal themselves, and Dido offers them hospitality as guests, including giving them wafers and water. [1] 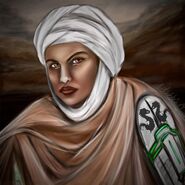