The Syndicate
The Duke of Hands is a Pink from the Ephraim chapters of Iron Gold.

As an agent of The Syndicate, he carries an ivory staff engraved with the group's octopus symbol at the top. The symbol of his personal rank is marked on his forehead in voice-activated ink that becomes visible when he utters the Latin phrase "Ave Regina."

The Duke of Hands is a custom made hybrid Rose, bred from two of the rarest genetic lines of his color and born in the the breeding tubes of Luna's Hysperia Gardens. He is implanted with pheromonal defense mechanisms that lures people to him, making them sexually attracted to him, which can be diffused with the use of smelling salts, or if one is a Zoladone user.

During his time as a Rose, the Duke was trained in psychesonics, which can be hypothesized as an auditory defensive or offensive tactic.

During the Solar War, the Duke became one of the ranking leaders of the Syndicate, commanding the organization's network of thieves.

In his office, he has famous things he has stolen on display, as well as an ant farm where he places the hands he cuts off those who wrong him.

The Duke employs Ephraim ti Horn to kidnap Pax Augustus and Electra au Barca. Once Ephraim successfully kidnaps them, he is forced to help Virginia au Augustus and Holiday ti Nakamura find them again, and he successfully seduces the Duke before holding him hostage to free the children.

The Duke is shot by Gorgo, believed to be a subordinate up to that point, but Ephraim guesses the roles may have been reversed all along.[1]

While attending the Hyperion Opera, the Duke was captured by Theodora's Splinter operatives and taken to a Republic blacksite for interrogation.

After Virginia successfully downloads his memories with psychospikes, she uses the psychospike to completely erase the Dukes memories and identity. 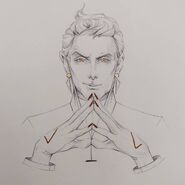 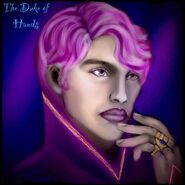 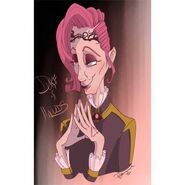 "So the golds made us into inscrutable enigmas to hold their attention, masters of art, sex, music, and emotion. Enigmas they could never fully understand, and that lack of understanding is the heart of fear." - The Duke of Hands

Retrieved from "https://red-rising.fandom.com/wiki/Duke_of_Hands?oldid=17151"
Community content is available under CC-BY-SA unless otherwise noted.