Eo is a Red, the wife of Darrow, and sister to Dio. She was an ordinary villager in the mining town of Lykos.

Eo is described as having thick hair the color of rust by Darrow and a round face. She has a slender build that is implied to be because of hunger.

She was idealistic and inspiring to most. For most of the books we see her through Darrow's rose colored lenses and she is portrayed as a one dimensional, perfectly pure, do no wrong girl with an amazing capacity for kindness. Later on, we see Darrow realizing that this wasn't Eo's reality. Eo was so much more than that. She was a young girl who could be spiteful and petty despite her kindness.

She receives lashes after getting caught in the bubbleGarden with Darrow, and is publicly hanged on the orders of Martian ArchGovernor Nero au Augustus for having aspirations beyond Red Society by singing a forbidden song. Darrow later buries her in the bubbleGarden, an illegal act which also got him hanged. For much of the trilogy she serves as Darrow's main drive.

Before her hanging, Eo secretly told Dio of her pregnancy and pleaded her not to tell Darrow, which drove her sister to tears. Darrow only finds out about Eo's pregnancy during a meeting with Harmony two years later, much to his grief. This revelation is what refuels his desire to bring down The Society.

After the propaganda video of her death was leaked to the public, it became viral, and she becomes known to the masses as Persephone, immortalized in graffiti and other media.

The two were deeply in love with each other even from the time that they were childhood friends. They lived as neighbors in the mines. When Eo became of age to wed (14), she waited for Darrow to age to 16 declining every man seeking her hand.

Darrow continues to love Eo long after her death, though also comes to accept that she was not perfect and that he needs to move on. At the end of Morning Star, Darrow vows to one day tell his son about Eo's dream, and how it inspired him to live for more.

Dio is Eo's younger sister whom she loved very much. At her hanging, she calls Dio over and exchanges her last words to her.

Darrow's mother. In Golden Son she reveals that she didn't much like Eo, due what Deanna thought to be manipulative tendencies. 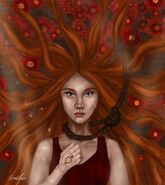