One half of her face is steam-burned. Darrow describes the other half as more beautiful even than Eo, with soft, milk-pale skin and prominent but delicate features. She has a cold and cruel demeanor. Her bottom teeth are uneven and nails poorly maintained.

Born in a martian mine owned by House Julii, Harmony was one of the few women allowed to work in the mines rather than the webbery, where she gained her infamous steam burn on half of her face. Eventually, her husband and children fell sick due to radiation, and "rott[ed] from a disease we cured 600 years ago,"[1] due to the low amount of medicine given to non-Gamma lowReds. Enraged at Golds, that allowed her loved ones to die, she vowed herself against them. She was then recruited to join the Sons of Ares.

As a member of the Son of Ares, she helps Dancer bring Darrow out of Lykos after he "dies." Darrow notes that Harmony is more aggressive and vengeful than Dancer. She gets Evey away from Mickey, knowing that Mickey is not a kind master. It is later revealed that she chose Titus to infiltrate The Institute the same way Dancer chose Darrow.

In Golden Son, she tells Darrow that Dancer is dead and that Ares wants him to sacrifice himself by carrying a bomb into a gala where many high ranking Golds will be. Harmony has been conducting terror bombings against the Golds, though many lowColors are harmed in the crossfire. Darrow is dissatisfied with her methods and her manipulations of Evey, who Harmony uses as a bomber. She manages to convince Darrow to lay the bomb at the gala when she reveals to him that Eo was pregnant when she died. However, Darrow does not go through with the attack, instead starting a civil war among the Golds. It is later revealed that she betrayed Dancer and Ares as she was not satisfied with their more cautious and passive strategy.

She is captured by The Jackal, and informs him of the identity of Ares and Darrow's true heritage as a Red to get out of captivity, betraying her cause out of spite of Ares true identity.

In Morning Star she is the Leader of the Red Legion, a terrorist group of lowColors killing every Gold and other highColor they can.

Sometime during the Solar War, the Red Legion dissolves into the Red Hand, focusing on ridding the world of Golds, and the Red "collaborators," Gamma.

In Iron Gold, it is heavily implied that Harmony is now the leader of the Red Hand, with the aims of killing all Gamma. She leads the attack on Lyria's village, and was the first soldier of the Red Hand to fire at Tiran, Lyria's Brother.

Harmony was directly responsible for the brutal death of Victra and Sevro's newborn son, Ulysses, as it was her and her group of the Red Hand who caught Victra while she was holding her baby. They killed Ulysses unceremoniously.

When Victra was freed with the help of Volga and Lyria, Victra and Lyria were able to catch Harmony. Lyria directed Victra to a nearby pitviper nest, where Victra threw her in. She screams in agony, but Victra and Lyria do not look back. It is assumed she would die in a few days time, after the pitviper eggs that were burrowed inside her have hatched and eaten her from the inside. 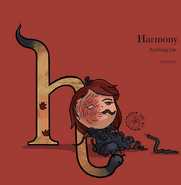 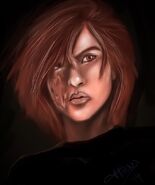