Karnus au Bellona is the eldest son in the Bellona household.

Karnus is forceful, sadistic, and adheres to the Gold social culture that holds strength, achievement, and martial prowess above all else. He looked down on his siblings, especially Julian, whom he found unworthy of the family name and of their mother's love. When Cassius brought a bird he had wounded with a slingshot to him, he dropped a rock on it.[1]

Mentioned to resemble an Obsidian in all but colour. He towers over typical Golds, with shoulders twice as broad as Darrow's.

Julia au Bellona prompted him to enter the Academy to butt heads with Darrow. After his Victory obtained from Octavia au Lune's ships, he roughs up Darrow in an outside room with seven fellow Bellona relatives.[2] He acts as his mother's primary agent of revenge against Darrow, despite having little affection for Julian. He later battles Darrow aboard the Sovereign's ship, where he is able to wound him, but is stabbed through the chest and decapitated by Darrow immediately after.[3]

Extremely strong, breaking the back of a Luneborn over his knee.[2] Additionally, he is a skilled commander of troops, even besting Darrow in battle, a feat few can claim. 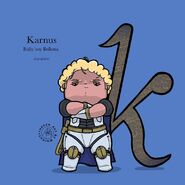