Darrow O'Lykos
The Howlers
The Sons of Ares

Kavax au Telemanus is the Primus of House Telemanus. He has a fox named Sophocles and believes in "magic." He is a Praetor.

He has four named children throughout the books, his two sons Pax and Daxo, and his daughters Thraxa, Xana and one other unnamed daughter. His wife is Niobe au Telemanus.

He is slow to anger. A boisterous personality. Considerate and sympathetic towards lower colors.

A giant among the Golds, his neck so thick that he can't be strangled, and he has to bend down in order not to hit ceilings. Unlike others, he shaved his head. Has a forked red beard.

Note: Years are based on the Unofficial Red Rising Wiki Timeline.

Kavax was born at his family's ancestral home in Zephyria, Mars.

Kavax becomes a major character in Iron Gold when he lands on Mars in the Lyria chapters. She leads the charge to rescue him. Afterward, he thanks Lyria and says if they ever need anything, he will help. He talks to her about pain, and then leaves. She chases him to his shuttle and asks to come along. Xana resists, but Kavax relents, claiming Sophocles magic. (He later reveals he planted the jellybeans on her, and the magic is often a coverup to help him get what he wants.)[1]

Once back on Luna, Kavax maintains an interest in both Liam and Lyria. He sends Liam to a boarding school and eats breakfast with Lyria most days. When he learns she can't read, he takes it upon himself to give her lessons, though they end abruptly with news of Darrow's escape turning the moon into a madhouse. [2]

At Quicksilver's birthday party, he is heard defending Dancer to Victra, reminding her that he is still their friend. He seems wary of the new republic, saying he warned them demockracy wouldn't work. [3]

Kavax is in the ship when the anacene bomb goes off, and is one of the few not completely unaffected. Sophocles attempts to guard him, and Volga saves the fox from being shot. After Ephraim takes Lyria, Kavax stumbles out of the ship and Dano shoots him twice through the chest. Despite the shots and the gas, Kavax is able to reach Dano and kill him with one punch. When he turns on Ephraim, Volga shoots him in the shoulder, and he goes down. [4]

By early January 754 PCE he has recovered from his wounds, though he now requires a cane to walk. He remains a faithful adviser to Virginia. 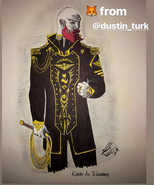 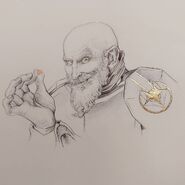 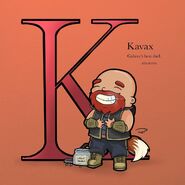