Octavia au Lune
Lorn au Arcos is probably the most notorious warrior in the Society. During his more than 100 years of life, he experienced many battles and was awarded by the previous Sovereign the title of Rage Knight.

His skills are unmatched and even with his old age, he is still feared as the most dangerous fighter in the system. After seeing all his sons die in a variety of battles, he retired with his personal fleet to the remote moon of Europa with the rest of his house.

Lorn appeared as a grizzled man with grey hair and a beard. He was not exceptionally tall for a Gold (being shorter than Darrow) but was broad and tough-looking. He was known for his thick hands marred with scars and wrinkles on which he wore the signet ring of an Olympic Knight.

Though he was seen to be more liberal than other Golds, Darrow still thinks he is stalwart and subject to the thinking of olden times. This is demonstrated in his behavior towards Tactus, emulating typical Gold brutality by killing him after he had surrendered. However, he began to express regret, showing that he is capable of changing. He was also wise and judicious, removing himself from Gold society as he correctly saw its decay into decadence and bloodshed.

Lorn is also something of a philosopher. He is quoted multiple times by Golds and applied his philosophy to the Willow Way, turning himself and his students into monstrous warriors. His persona is emulated by Darrow (his final student) who is saddened that he could not be more like his teacher. Nevertheless, his effect on Darrow is so profound that his student remembers his teachings even after his demise.

He was a highly renowned fighter and tactician, using his own fighting style known as the Willow Way. Showcasing Lorn's ability to observe his enemies, it uses principles taken from his years of combat for maximum effectiveness. Utilizing aggressive tactics different from typical Gold fighting styles, it has the practitioner rapidly attack limbs and move in a circle to confuse opponents. It is so revered among warriors in the Society that many would pay exorbitant fees for a single lesson. Adrius au Augustus, with his immense wealth, is even unsure if he can afford lessons for Darrow under Lorn. He is also an excellent teacher, having trained deadly warriors such as Aja and Darrow.

Born to House Arcos, Lorn's family had some martial background as he described his father as a tough man who lived in an era where eight Iron Rains fell. Lorn made for himself through his martial prowess, eventually ascending to the post of Rage Knight. He also gained the nickname of "Stoneside" due to one occasion where he ate a rock on a bet with a Gray.

As time passed, Lorn eventually had a large family where many of his sons were claimed by war and eventually left the position of Rage Knight to retire to Europa with his remaining kin. Despite this, he is still referred to as the Rage Knight and has garnered fame as a warrior-philosopher as he is quoted by many Golds.

Lorn au Arcos is appointed by the Sovereign as the Rage Knight.

House Cylus is massacred and removed from records, Nero au Augustus takes place as ArchGovernor of Mars with the support of Octavia and two Olympic Knights, including Lorn au Arcos.

The Last Student of Arcos

As one of the Drafters for House Mars for the Martian Institute, Lorn au Acros selects Darrow O'Lykos as the first member of House Mars, and is the 10th to be picked out of 1000 students.

Lorn gifts Darrow the knifeRing given to him by Dancer through Fitchner au Barca. Days after Darrow wins the Institute, he agrees to train Darrow in the Willow Way every morning for the next three years.

After Darrow leaves for the Academy, Lorn retires as Rage Knight and moves House Arcos to an island on Europa from Elysium in Cimmeria, on Mars.

Darrow comes to visit Lorn to convince him to join Nero's war effort.

Lorn is an integral part of the war, using his ships he helps Darrow to defeat the Bellona and Sovereign fleets.

He attends Darrow's Triumph, but in his eagerness to leave and seek peace, lets Roque au Fabii present the Triumph Mask to Darrow instead of himself. While Nero and Roque proceed with the celebrations, he listens from afar with his grandchildren. Nero calls him to arms as Roque poisons Darrow, Fitchner revealed to be dead and Antonia kills her mother, but before he can do anything is attacked by Lilath au Faran hidden as a Pink waitress. He loses four fingers in the process, before he is gutted by Adrius au Augustus, and his throat slit by Lilath.

During Darrow's time in the Institute, Lorn sends Dancer's knifeRing to Darrow as a bounty. 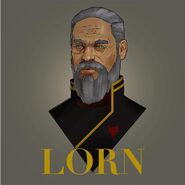 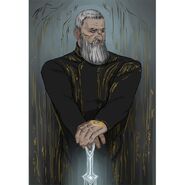 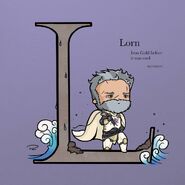 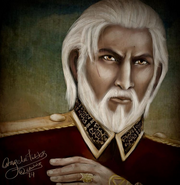