Harmony
Lyria of Lagalos is a Red of the Gamma clan on Mars and one of the narrators in the Iron Gold Trilogy. She lived in the mines of Mars until she was liberated by The Republic after The Rising. Despite promises of a better life, Lyria feels that Sovereign Virginia au Augustus and the Rising have failed the people.

Lyria is a kind person, especially with little children. She dislikes nonsense and is very straight forward. She can be very stubborn and gets herself into trouble for being at the wrong place at the wrong time. She also has a mean streak and can be cruel to those around her.

She is quick to help those in need, like when Kavax au Telemanus was about to drown under the weight of his armor in the lake near her refugee camp, she swims to him with a dislocated shoulder and ties a rope to him to help pull him out of the water.

She is nostalgic after her life in the mines, considering that life was better then, when Gammas had all the means to survive and HellDivers were heroes. She resents Darrow for most of Iron Gold and considers he betrayed his people. Eventually, she comes to understand Darrow and the Sovereign better and after a discussion with Virginia, she lets go of her resentment.

Lyria is Red teenager of the Gamma clan of Lagalos. She has curly short hair and brown skin. She straightened her hair while on Hyperion, but after her kidnapping by Figment, she let it set naturally. 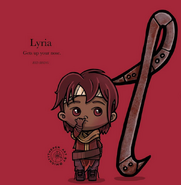 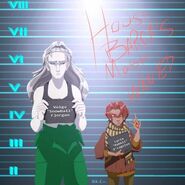 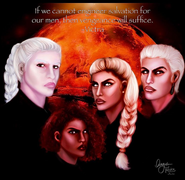