Darrow O'Lykos
Lysander au Lune is the grandson of former Sovereign of the Society Octavia au Lune. He was Octavia’s heir until her deposition by Virginia au Augustus in 743 P.C.E. After The Rising, he fell under the guardianship of Cassius au Bellona, and spent his formative years with Cassius in exile, rescuing imperiled ships around the Asteroid Belt.

Grandson of the deposed Sovereign, Lysander au Lune was spared by Darrow ten years ago on the condition that he would live under the tutelage of Cassius au Bellona. When investigating a crippled ship in deep space, Lysander and Cassius rescue a mysterious Gold woman and, in doing so, are thrust into the center of a violent coup among the Golds of the Rim. Will Lysander follow Cassius’ teachings, or will he choose to forge his own bloody destiny among the Golds? [1]

Lived on Luna ever since the death of his parents. Groomed by Octavia to be the next Sovereign. He sees Darrow as his childhood hero after witnessing Darrow's campaign and siege of Olympus during his years in the Institute.

For his sixteenth birthday, Cassius gifted him with the razor of his brother Karnus au Bellona. It was considered to be a very honorable gesture as Cassius held onto it for sentimental reasons.

In his younger years, Lysander was quite innocent and very honest, taught to never lie. He was brave for his age, overcoming fear to behave reasonably and with calm even in intense and dangerous situations.

He was brought up in an incredibly strict household. Being the grandson to the Sovereign of men, he grew to be able to read people and see through social masks. He had the advantage of being taught how to use the Mind's Eye by Octavia, which also helped in being able to see through people.

While Lysander sympathizes with the lowColors and Darrow's reason for the Rising, Lysander believes that order brought by Gold rule is far better than the chaos that currently rules the Solar system.

He has also shown care for the lives of lowColors.

According to Darrow, from first seeing him, Lysander's eyes are so bright they are considered like golden crystals, beyond gold. Lysander has long golden hair and is quite lean and tall. In Dark Age, he gets a severe burn half his face, which impairs his sight in one eye. By the Long Night, Darrow notes that he has gone bald from radiation poisoning

Lysander is present when his grandmother, Octavia au Lune, offers Darrow a chance to join her, and to make him one of her Olympic Knights. When Darrow refuses and is confronted with three Stained, it is Lysander who stops Darrow before he even starts. He confesses to having watched all his videos from the Institute and the Academy several times. Lysander presents a box containing Octavia's Oracles, which are used in a game of truths between Darrow and Octavia.

Later, Lysander is kidnapped by Mustang as leverage for Darrow and House Augustus's passage back to Mars. He doesn't show any fear and understands the politics of the game. Lysander yells out to Aja to prevent her from attacking Quinn , but she severely wounds Quinn before they are able to make their escape. Before they could even land, Tactus takes Lysander and escapes the ship.

Lysander is ten years old now and is reintroduced in the tail end of the book. He is there at his grandmother's side when Cassius, Antonia, and Adrius bring her Darrow, the supposed dead body of Sevro, and Mustang to her.  He is witness to the death of Antonia au Severus-Julii, the Truth Knight, the Joy Knight, Aja au Grimmus, and his grandmother, Octavia. At one point, he attempts to fend off Darrow and the others. Cassius tells Lysander to drop the sword he's holding, but it's when Octavia tells him to stop that he does.  After Octavia's warning to stop Adrius from destroying Luna, Lysander suggests to Darrow to call on the Ash Lord for his help. It is through Lysander's plea to his godfather to listen to them that prevents Luna from being completely decimated. And though Octavia died by their hands, Lysander accepts that Mustang is their conqueror and new Sovereign.  The now alive Sevro wants to end the Lune line by killing Lysander, however, Cassius does not allow this. Lysander is now under Cassius' protection and claims him as his ward, bringing Lysander with him to explore space in self-exile.

He has been traveling the Asteroid Belt as a ward of Cassius au Bellona in their ship, the Archimedes, along with the ship's pilot, Pytha. He and Cassius were both captured by the house of Raa.

Lysander finally meets with Ajax and Kalindora au Sun aboard the Annihilo, where Lysander’s DNA is tested to verify his identity.

Lysander, along with Diomedes au Raa and Seraphina au Raa, is taken to a holo conference with the heads of the 200 remaining Gold loyalist families in the core, where he relays his whereabouts for the last decade and declares his intention to secure an alliance between the Rim and the Core.

As a show of good faith, Lysander and Seraphina are asked to fall in Atalantia’s Iron Rain against the Republic forces on Mercury. 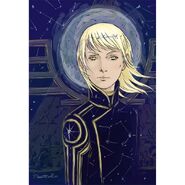 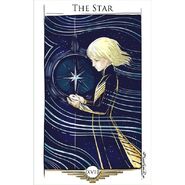 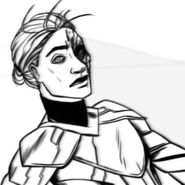 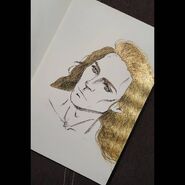 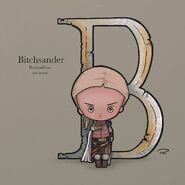