Sovereign of The Society

Octavia au Lune was the Sovereign of the Society and the possessor of the Morning Throne. She was very confident in speaking the truth. She is murdered in Morning Star as part of the coup that establishes the Solar Republic.

She was born on Luna to a tyrannical father and is a Peerless Scarred. At the age of nine, she started a riot by throwing her diamonds out of a flying car. Eventually she would develop a hatred for her father and would ally herself with a young Nero to overthrow him. She would rule with an iron fist.

A tyrant, Octavia is a peerless who views herself as above "specks" like Darrow. This leads to her making decisions to wipe entire houses from the record. Despite this, she seems to have a genuine belief that the society is the best world mankind can have and has a strange affection for her subjects. She deeply loves her grandchild and fears that one day he would grow up to be like her father. She also fears the inevitability of age.

Due to her age treatment, she has been described to have an ageless face. She is a Peerless Scarred, so there is a long crescent scar across the right cheek.

Stops the sanctioned duel between Darrow and Cassius, fearing for Cassius' death, and revealing her hypocrisy.

She later offers Darrow a chance to join her, and to take the title of an Olympic Knight. He refuses and participates in a game of truths against her using Oracles. During her game, many truths are revealed from both sides, including the following - she has sixty-one unregistered electromagnetic weapons and lists off where they are, she provided Karnus au Bellona the ship that gave him the victory against Darrow at the final Academy battle, the coordinates of the Deep Space Command Center, as well as the fact that during the gala, she did plan to let the Bellona assassinate the quarantined House Augustus.

Later, she amasses forces to ready Mars for war against House Augustus, and goes down to its surface personally to meet with Bellona, only leaving in a ship equipped with ghostCloak technology at the last second, allowing Darrow to catch up. She orders Fitchner to film his execution but the plan goes awry as Karnus is killed and Fitchner reveals himself as Ares, injuring herself in the process.

When The Rising sails upon Luna with their fleet, Octavia hides within the Crescent Vault underground. She directs the war effort from there, when Darrow and Virginia are brought to her by Cassius, Antonia, and Adrius.

She sentences Antonia to death for her role in the defeat of the Sceptre Armada, and the sentence is carried out by Aja.

When it is revealed that Cassius is working with Darrow and Virginia, Darrow attacks her and stabs her fatally with a knife. She watches helplessly as Aja and her guards are killed.

It is revealed in her last moments that she was being blackmailed by the Jackal into giving up her seat as Sovereign to him, and she asks Darrow and company to stop him before dying.

Octavia loved Lysander dearly and spent the majority of the boy's life grooming Lysander to be her eventual successor as Sovereign.

She did, however, use the Pandemonium Chair to alter his mind so that he couldn't see his mother in his memories due to Octavia's jealousy that Lysander loved her daughter more than her.

Moira, Aja, and Atalantia au Grimmus were the children of her greatest ally, the Ash Lord, and her closest confidants. She treated them like her own daughters, and they were highly loyal in return.

Took Mustang under her wing upon seeing her potential.

Does not understand him but covets his power nonetheless. In Golden Son, it was suspected by her that Darrow was a part of the Sons of Ares. She had been following his movements since the Institute. 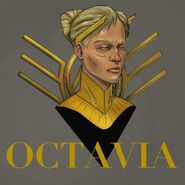 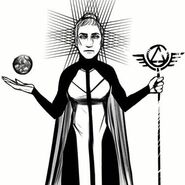