Unknown (at least 60 as of Morning Star)

Sons of Ares, Volume One

Octavia au Lune
Regulus ag Sun, better known by his nickname "Quicksilver", is a Silver, and the richest man in The Society, through his vast assets in the Helium-3 processors on Phobos. He owns many midColors including engineers, hackers and pilots, as well as the contracts of two Olympic Knights. He is gay; his husband is Matteo, a Pink.

In Morning Star, it is revealed that he is the highColor liaison for the rebel organization, the Sons of Ares. After being captured and interrogated by Darrow, he volunteers his service and resources for Darrow's cause.

Fitchner sells his contract to Quicksilver the day after his graduation from the Institute of Mars, and is sent to Triton to help manage terraforming operations there.

Upon his return, Quicksilver pressures Fitchner into working as his personal killer, assassinating Golds from rival corporations to advance his economic interests.

When Fitchner balks at this, Quicksilver blackmails him by threatening to expose his marriage to Bryn.

Though never mentioned in the book, Quicksilver provided Fitchner with the funds to pay for Darrow's carving.

Roque mentioned that he was giving the keynote for a conference on Luna.

Since the end of Red Rising, he has been helping The Jackal build a media empire on the mistaken belief that Adrius will be the lesser of two evils compared to the boy's father.

After Darrow's capture at the end of the novel, he and his contacts within the Sons of Ares go underground and retreat to the shadows to ensure their long-term survival.

Darrow and the Sons of Ares infiltrate his corporate offices on Phobos, planning to capture him in an attempt to destablize the media and communications network that he helped the Jackal to build. While being interrogated, Quicksilver reveals that he was in fact one of the founding members of the Sons of Ares, having provided Fitchner with funding and resources in the resistance movement's early days. With the knowledge that Darrow is alive, he recommits his support to the rebellion.

Quicksilver describes himself foremost as a capitalist, believing that the overly rigid structure of the Society has hampered technological and commercial advancements. 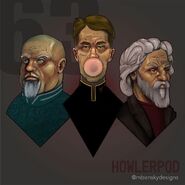 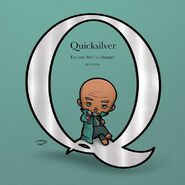