Romulus is a rigid, tough, and above all, disciplined man. A keen thinker with a reasonable, respectful manner, Romulus has an aura of maturity and confidence, and can be charming when he wants to be. Open to negotiation, Romulus is direct and upfront, not one for insults and games, and shows respect and decency to any guests beneath his roof, abhoring the idea of going back on his word. Romulus additionally has a low opinion of Golds in the Core of the Society, finding them to be spoiled, decadent, and savage. He views himself and others in the Rim to be more like the Iron Gold who conquered Earth and founded the Society, and views violence as an unpleasant tool that must not be used lightly.

His discipline extends to his family life, expecting his children to earn their way to comfort and wealth, rather than simply be granted them. However, he seems to have strong affection for his children, wishing to avenge his older daughter and seeming aggrieved at the news of her death.

He acknowledges the suffering of the lowColors, but insists that that is the way it must be for the Rim to survive. He is not vindictive or outwardly cruel to them.

Romulus is rumored to use a stone from the original Roman Forum as a pillow.

He is the same height as Darrow but thinner, with a twice broken nose and a larger right eye. His left eye is missing, replaced by a blue and black marble orb, and his face and skin is smooth and flawless disregarding the scars form battle. He has long, dark gold hair that is kept back in a ponytail. Darrow notes that Romulus appears to be both serene and violent.

When Lysander describes him, he mentions "surprisingly sensual lips riven with two scars." Romulus has long, dark gold hair streaked with black, and puts it in a bun pierced with a stick of black wood. His right arm is missing (since the battle of Illium) and has not been replaced. [1]

Romulus lost his father and his older daughter to the Society during Darrow's Triumph, and is in due time raised to the status of 'Sovereign' of the independent Rim by his constituents (the Moon Lords). Darrow and Mustang seek his help when they decide to defeat the Sword Armada of the Society. Though Darrow is initially wary, Mustang says that Romulus would never harm a guest beneath his roof, a vow he upholds. Romulus invites both Darrow and Roque au Fabii to win over his loyalty and support, with the archGovernor of Titan in attendance as well. Although Roque presents a strong case, including revenge for his father and daughter, Romulus is swayed by Darrow's promises of both vengeance and independence and his trick involving the storage of nuclear weapons, which he implies will be used against the Moon Lords. Romulus casts Roque out, swearing a blood feud against him.

Romulus and the Moon Lords aid Darrow in breaking the Sword Armada and winning their independence, though Darrow, under the guise of Roque's vessel, destroys the enormous dockyards of Ganymede, thus preventing Romulus from turning against Darrow in his lifetime.

Romulus is introduced again in the Lysander chapters of Iron Gold. He is at the barren outpost when Seraphina arrives with Lysander and Cassius. While Lysander expects him to be on a throne, Romulus actually sits cross-legged on a thin cushion, wearing only a scorosuit. He is serene and calm, and Lysander is intimidated.

He greets those who have arrived, praising Pandora for bringing back Seraphina. He examines Cassius and Lysander, but initially deems them non-threatening, having more to deal with in punishing Seraphina. He discusses where she has been and why, and they argue. He reveals that he has told all of Io that she was on a mission for him, to protect her from them finding out the truth, that she went rogue to look for evidence about the destruction of the Docks of Ganymeade. Romulus detains Seraphina and puts her under house arrest, telling her he does not have the heart to bring her before the Moon Council - which would likely sentence her to death.

After she is gone, he tells Cassius and Lysander the only "right he can afford [them] is a swift end" and instructs Pandora to behead them. This is interrupted by Dido's arrival. [1]

Dido arrives with with an entourage of more than 50 armed Golds including her nephew Bellepheron and several lancers. She sends them to find Seraphina, and confirms she had conspired with Seraphina to send her on the search she was on when Cassius and Lysander found her. Dido dramatically argues with Romulus, and then tells him her men are taking Io already, and she will be the "Protector" of Io until a new Sovereign is elected. Dido implies that Serphina did find the evidence she was looking for, and tries to arrest Romulus. She commands Bellepheron and her men to attack and kill anyone "not dragonblood." When Diomedes and Bellepheron fight, she stops them all, and Diomedes turns his hasta on her. Romulus calls him off and is taken away, saying "You waste our blood. Let them take me. I have nothing to hide.".[2]

Romulus is held until his hearing. He is "implacable" as the evidence is played again. After a quick interrogation of Seraphina, he is questioned. Romulus does not contest the charge of gross wartime negligence, and even admits guilt. Then, Chance rings her bell and brings the charge of arch treason. In this, Romulus remains "unaffected." When questioned by Helios, Romulus answers that he did know, and did conspire. Dido begs him to reconsider, but he says he must tell the truth - the evidence they presented was offered to him first and he killed the brokers and burned their ship. He gives a moving speech about honor and what will happen in the inevitable war, and then he is taken to prepare for his execution. [3]

At his ceremonial execution, to be a walk to the Dragon Tomb, Romulus says goodbye to each of his family members. Lysander is also invited to his own surprise. He encourages them to be honorable and to forgive their mother, to unite the Rim again. To Lysander, he says inspirational words about stopping the coming war, about becoming an "echo" of Silenius and Akari. He says goodbye to Dido, and then prepares to walk to the Dragon Tomb by stripping naked. He turns to the onlookers and gives a short proclamation ending in "Akari, bear witness!" He makes it 71 steps toward the Tomb before falling. He attempts to get up, but cannot with only one arm, and he dies ten steps from the monument. [4] 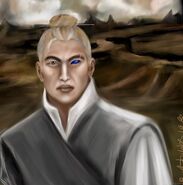