The Poet of Deimos

Roque au Fabii, also known as the Poet of Deimos, is a Gold, and the Imperator of the Sword Armada directly under the command of The Sovereign, as of Morning Star. He had been one of Darrow's best friends during their time in The Institute on Mars, but subsequently lost faith in Darrow and his cause, and betrayed him to The Jackal. He was romantically acquainted with Quinn.

Instead of adhering to the dataDrops that stand for the schooling that young Golds get, Roque was raised in more organic settings by talking with mentors and teachers on Earth, walking beside lakes and so on. He is a quiet and creative individual, with a high affinity for literature and the nature.

Roque is calm and is known for his quiet nature and composure even in intense situations. As a poet, he is fond of using poetry to get across particular ideas and pieces of advice. Roque is mostly fairly gentle, not one for outbursts of temper. However, when sufficiently angered, Roque is a skilled liar and is more than willing to use extreme prejudice to defeat an enemy. Roque is also said to have a deep anger hidden underneath his quiet and thoughtful nature. It's this rage that got him put in House Mars.

He can be a loyal friend to those he cares for, forging bonds of brotherhood with Cassius and Darrow. However, Roque's outward compassion and calm demeanor hides his firm, rigid beliefs in the notions of the supremacy of the Golds in the Society. While not outwardly cruel to the lowColors, he has little sympathy for them as well, and believes that Golds have a right to be above others. His notion of superiority of the Gold race ultimately causes his undoing.

As a romantic, Roque loves deeply, and develops intense feelings for Lea, Quinn, and even for his Pink lover, is heartbroken by their betrayals and death.

Roque's analytical skills and thoughtful nature allow him to become an excellent ship commander. Roque's tactical brilliance in space is nearly unmatched by any other character. Darrow is only able to best Roque by usage of surprise unseen before tactics.

Roque is described by Darrow at one point as what a Gold should be. Uninhibited by greed, lust or cruelty, Roque is at his core what Golds were meant to be. Roque has sympathy and understanding for the lowColors, but at the same time is willing to rule with iron and without mercy. Roque's choice to take his own life rather then be captured on the bridge of his captured warship reflect his commitment to the Golds' rigid system of honor.

Roque was leaner and shorter than the typical Aureate, described as having high cheekbones and hair the color of wheat.

One of Darrow's advisors and true friends.

After being "Shamed" for his less capable performance at The Institute, Roque joins Darrow in becoming a lancer to House Augustus, and gains important experiences in fleet commandeering. He was romantically involved with Quinn, who gave him comfort after the death of Lea. His confidence in Darrow begins to waver when Darrow disregards his safety and anesthetizes him during the attack on House Bellona, and falls after Darrow's failures in keeping his men alive, in particular Quinn at the hands of Aja au Grimmus.

After the battle with Bellona, he was hailed as the 'Nelson incarnate' for capturing over 80% of fleet. He publicly betrays Darrow to The Jackal during Darrow's Triumph and exposes Darrow's Red identity and true motivations, thus sealing Darrow's fate.

12 months after betraying Darrow to the Sovereign, Roque has become one of the Sovereign's brilliant commanders and is in control of a massive fleet and its flagship The Colossus. Several months after Darrow's rescue and ploy on Phobos, Roque is sent to meet with the Moon Lords about aiding the Sovereign to stop the Rising. The meeting is also attended by Darrow and Virginia (Mustang). The Moon Lords have many ships and a massive harbor. Their aid given to either the Rising or to the Sovereign, could shift the war to either side's favor. Both sides know this and pull out all the cards to convince the Moon Lords to join their opposing sides. Ultimately, Roque The Poet loses this battle of words. Although to be fair it is to little fault of his own. Roque gave the Moon Lords honest and honorable promises and speeches, Darrow and Mustang however came with a great lie that Roque could not have prepared for. Mustang informed the Moon Lords that several hundred tons of nuclear weapons had been moved off of a previously unknown asteroid base. This was true, however this was a ploy orchestrated by Adrius au Augustus (The Jackal) to gain leverage, and not, as Darrow and Mustang insinuated, by the Sovereign to wipe out a moon. This lie hits home with the Moon Lords, when 60 years ago the Sovereign nuked the moon Rhea to glass to quell an uprising. The Moon Lords know this woman and they fear she might attempt something similar on another planet of theirs. This lie brings the Moon Lords temporarily to the side of the Rising.

After words fail, Roque turns to war. Roque prepares his fleet to meet Darrow and the rest of the Rising. Roque goes into this battle prepared but also very confident. Darrow has less ships and is in Roque's mind the inferior commander. Although this is easy to label as hubris, Roque has little reason to be afraid. Using the many unique talents and skill sets of the many colors Darrow tricks Roque into getting close to the Pax (Darrow's flagship) and boarding it, giving Roque the assumption he has won. Intentionally sacrificing the Pax, Darrow had hidden hundreds of modified claw drills that he and his soldiers used to board Roque's ship. In the ensuing boarding, Roque is betrayed by his Pink lover and is left at the mercy of Darrow and his allies. Adhering to classic gold honor, Roque takes his own life on his bridge, rather then be taken prisoner or kneel to Darrow.

Roque is given an honorable funeral by Darrow.

In Golden Son, their relationship undergoes a massive rift. Roque loses faith in Darrow, believing him to not care for his friends and to hide his true intentions. He betrays Darrow after discovering him to be a Red, and condemns Darrow to captivity and torture.

In Morning Star, they are enemies, on the opposite sides of the war, with Roque fighting for The Society and Darrow for The Rising. While Darrow mourns the loss of their friendship, they make war with one another, ending in Roque's defeat at Darrow's hands, and his eventual suicide.

Roque and Quinn both attended the Institute together and were part of House Mars. After their time there, they began a romantic relationship together. Quinn is killed in the battles against the Sovereign, which Roque blames Darrow for. Her death is the key catalyst to Roque losing faith and betraying Darrow.

Lea used to follow Roque everywhere. On the day of her death, Roque reveals to Darrow that he loved her. He is deeply hurt by her death, and regrets never having said anything. 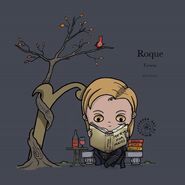 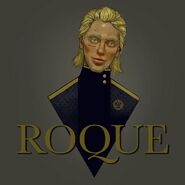 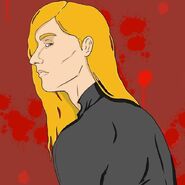 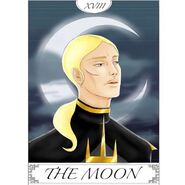 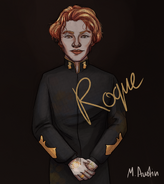 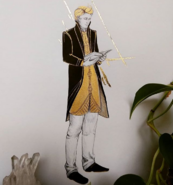