Volsung Fa
Sefi the Quiet is an Obsidian, the sister of Ragnar Volarus and the daughter of Alia Snowsparrow. Sefi earned her nickname after she took a vow of silence when her brother, Ragnar, was sold into slavery.

Sefi stands slightly taller than Darrow in height. Her face is very angled and her blue eyes are small and very close together. Her lips are formed in a permanent pursed look. The left side of her head is shaved and shows a blue wing tattoo surrounded by astral runes. On the right side of her head, her white hair is long and braided. Her face is unusually smooth for an Obsidian. She wears an iron bar on her nose and more tattoos adorn her eyelids, appearing when she blinks. [1]

A black double-bladed war-axe, originally used by her mother Alia. Sefi goes on to use the axe to execute god prisoners on two occasions.

Originally Lorn's razor, Aja au Grimmus took it herself to use. Following Aja's death, Sefi attained the razor by unknown means from Sevro au Barca. Sefi wears it around her forearm.

Sefi loved her brother Ragnar so much that she committed to a life of silence when their mother gave him away to be a slave to the Golds. She only started speaking again after she killed her mother.

She was also very devoted to her people and wanted to give them a better life, which was her reason for leaving Darrow. She wanted her people to stop fighting a Gold's war, even if it was for Darrow, which was the reason she had chosen to not continue on with Darrow to Venus.

In Morning Star, Sefi witnessed the death of her brother Ragnar on her home planet, and is convinced by Darrow to join his cause in freeing the lower Colors from slavery. She kills her mother to usurp the position as the Queen of the Valkyrie, after her mother refused to ally with Darrow in freeing the Obsidians.

Her tribe caused a great disturbance on Darrow's starship by attacking other highColors, both allied and captured, after being shown the HoloDisplay of The Jackal executing Narol. The riot is only dissipated after Sevro au Barca willingly offers his and Cassius' lives to them as a peace offering.

After the Iron Rain on Mercury, Sefi refused to join Darrow in another war, leaving Darrow without any Obsidians to fight with him after he escaped imprisonment and left for Venus.

Sefi and her Obsidians have taken shelter on Mars at the old House Bellona citadel, Eagle Rest. There, they have taken Pax and Electra as their hostages/wards, along with Ephraim.

She makes a deal with Ephraim to teach her skuggi how to be more like freelancers, and in exchange, she'll have Volga and Lyria transferred to him, which she agrees to.

She has her men bring Ephraim, Pax, and Electra to their ship, the Heart of Venus, during the events of the Day of Red Doves. While they watch, she has her men execute her Pink servant, Amel, who has been accused of treason. Sefi then tells the three that Virginia has been killed. She then tells Ephraim that she will be taking the Cimmeria mines. After the success of the Cimmeria mines, she gifts Ephraim with his own ship.

During a big drake hunt, Sefi had the drake in her sights and all she needed to do what pull her bowstring and shoot the arrow below the drake's eye, but for some reason she isn't able to pull enough on the cord to shoot. However, the drake is killed by Freihild and Ephraim. During the celebration and harvest, Sefi quietly goes into her ship, the Echo of Ragnar.

Sefi is challenged by her father Volsung Fa for the leadership of the Obsidians. Fa then easily defeats her in battle, where he splays open her back and pours salt into her lungs. Sefi is declared to be worthy by Fa for refusing to cry out and he wipes her silent tears away and says she will get to be with her brother Ragnar in the next life. He then pulls out her heart and eats it. 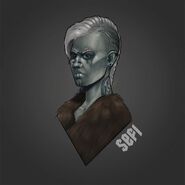 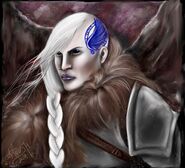