Seraphina au Raa is the daughter of the Sovereign of the Rim Dominion, Romulus au Raa and his wife, Dido au Raa. She is a Gold of House Raa and is the eldest living daughter of Romulus. She leads the Dustwalkers.

Seraphina is first introduced in Morning Star as a young daughter of Romulus.  Her part in the story is nominal.  She plays a far greater role in Iron Gold.

Seraphina is described as looking wild[1], being slow to smile, and having brusque movements.[2]

As a child Seraphina was described as a pale-faced, gaunt girl with messy short-cropped hair.[1]

Ten years later, Seraphina is described as a fierce looking woman who is not as beautiful to Luna’s standards because of the hint of wildness beneath her surface. She has full lips, a slightly hooked nose, and her eyes are a dull-gold.  Compounding her natural ferocity, she wears her hair buzzed short on one side of her head.[2] By this time, she has become a peerless scarred after attending the Io Institute.[3]

Seraphina grew up on Jupiter’s moon Io in the Raa family home set in the shadow of a volcano in a large yellow plain.  The home and the small property surrounding it was enclosed by a pulse bubble to protect it from the elements of Io’s surface.  The home was a collection of various gardens connected to smooth, white-walled rooms with no roofs.  The architecture, very minimalistic and accentuated the landscaping and greenery.[1]
Like her siblings, Seraphina was raised without access to the HoloNet until the age of 12 so that they could form their own opinions on their studies before they hear the opinions conveyed by media.  She was privately tutored and had no servants.  All evidence suggests her childhood was peaceful yet disciplined.  She had chores, such as gardening, and was raised by a family who taught her life-lessons through many facets whenever possible.  She was wise, thoughtful, confident, and was so inquisitive that she would climb the ivy on the outside of her family home to listen in on the adult-conversations she was closed off from. Her only involvement in Morning Star was a brief conversation with Darrow, when he traveled to Io to visit her father, Romulus au Raa.

Seraphina is found by Lysander when he and Cassius board the Vindabona. Seraphina had been trapped in a wire tacNet, where she is mostly naked and covered in engine oil.[4] Lysander chooses to rescue her first. She demands his stims, and he gives her the last of what he has. She takes his razor to exact her revenge on the Ascomanni, leaving Lysander unable to help the remaining lowColor crew members.[5] She returns in even worse shape, but Lysander gets her on the Archimedes, and the ship continues her course to the asteroid, S-1392, that she had paid for passage to, while she is in and out of consciousness. Lysander continues to try to care for her wounds, and discovers she is scarred.[6] After the Archi is intercepted by a Rim warship, she is discovered in the medbay of the Archi while Cassius and Lysander are being interrogated. She tells Diomedes she has found nothing and insults Pandora, who insists she must have found something.[7]

After the return trip, Seraphina is back to full health. She is brought to her father, Romulus au Raa in a remote outpost. She calls Cassius and Lysander friends for saving her life. She argues with her father about where she has been and why. She argues with Marius, her brother and her father's Quaestor, about the use of torture and killing of an Obsidian, Hjornir. Seraphina reveals she was looking for the truth of what happened to the Ganymeade Docks. Her father reveals he has no intention of letting her return to Sungrave, but instead he plans to keep her out of sight, virtually under house arrest for the rest of her life as punishment for leaving. She is dragged out of the room.[2] After Dido's arrival and subsequent clash with Romulus, Seraphina is released, and tells her mother she has found what she was looking for on her trip. She tells Dido Cassius and Lysander saved her life, and Dido calls them guests. [8]

Seraphina and Dido take Cassius and Lysander to Sungrave. She gives Lysander a short tour, but he is too distracted by her to focus on the city. She tells him Pytha is alive and fine.[9] Before dinner, Seraphina visits Lysander with clean clothes. She insists on watching him change, making him uncomfortable. She notes his scars, and asks about the one given by Sevro, who Lysander calls "the Reaper's beast." She talks about her philosophy of revenge, and Lysander counters it with Cassius' ideals of leaving the past behind. She continues to talk about the value of Golds, and calls Lysander gentle, but suspicious. She admits her mother did not send her to Lysander's room and that she is there on her own accord to see if he is "worth saving."[3]

At the dinner, Seraphina is light and jovial, arguing in favor of Odysseus in the family discussion, and praising Diomedes as the sword of Io. She says one day Diomedes will fight the Reaper. After dinner, the conversation turns and Seraphina explains the rations to Lysander and Cassius. After Dido explains why Seraphina was sent on the mission where they found her, Seraphina reveals she put the evidence in the razor, revealing, she's known who they were all along.[10]

When Dido announces they know who Cassisus is, Cassisus jumps up, but Bellepheron moves to cut off Lysander's arm. Seraphina calls him off of Lysander.[11] When Lysander looks to her during the gruesli scene (removing Cassius' mask), Lysander notes she is no longer an ally, and instead hates Cassius as much as anyone. Dido argues with Cassisus about the war, and Seraphina sticks up for it, claiming they will bring order. After discussion, Dido asks Diomedes to repay the bloodfeud, but he refuses. Seraphina offers to "do the honors" but Dido tells her not to, instead calling on Bellerephon. [11]

While Cassisus and Lysander await the duel, Cassius warns Lysander that Seraphina "doesn't give half a shit" about Lysander. When it is time for the duel, Seraphina sits next to Lysander, saying she's sorry he has to watch Cassisus die, but is not sorry he will die. They argue a little, Lysander's feelings toward her changing. After Cassisus duels many members of the house, his honor remaining, Seraphina volunteers as Dido's "last card to play."[12] She is an excellent duelist, but just as she is about to kill Cassius, Lysander jumps down from the audience into the circle and stops her. [13]

After Lysander betrays Gaia's mission to save Romulus, Seraphina is with Dido. Seraphina says she doesn't trust Lunes, but agrees Lysander is being honest. The two women argue about next steps to take, and Seraphina stands up for a fight with minimal violence, convincing Dido to reason with Vela instead of attacking her legions. Then they question Lysander and his proposed allegiance to their cause, calling him the "residue of tyrants and genocides" and accusing him of cowardice.[14]

Before Romulus walks to his death, he talks to Seraphina, who is upset he told the truth. She pulls back from his final words to her, and watches from afar. After Lysander talks with Romulus and muses about what love and honor are, he joins her on the dune, where she counts Romulus's steps.[15]

She escorts Lysander back to her mother, where he asks to join the war. Seraphina initially tells him he cannot because he is a Lune, but after he speaks about Romulus's last words to him, she seems to reconsider. [16]

Seraphina chooses to participate in the Iron Rain alongside Lysander to prove herself. When the hypercane strikes, she guides the Praetorians to the Storm God because of her experience with hypercanes in the Rim. In the eye of the storm, she is split in half by a man-sized slug 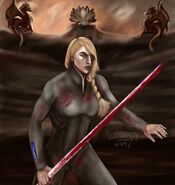 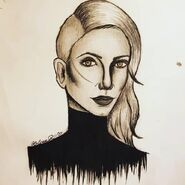