Theodora was Darrow's Pink steward starting in the Academy, later joining The Rising. She was Darrow's personal valet and socialadvisor. She is noted to have been a Rose courtesan, a subset of highly-desired Pinks, in the past. Supposedly she is older than some Pinks, although the age-range for what is considered old for Pinks is unknown.

We meet her in Golden Son, smiling to her younger charges at the bridge's valet station after Darrow's crew is rejoicing, confident they won. However, a second ship slips through his lines. Crew members of all colors are running to escape pods as Darrow sees Theodora trying to pry a young scared Blue from his station. Darrow lunges for Theodora as the second ship rams his, devastating Darrow's flagship. They're thrown through the bridge as alarms and fires start. Darrow is bleeding and in pain but Theodora urges him to get up. One of Theodora's leg is shattered and splayed unnaturally. Darrow throws her on his shoulder and tries to find the escape pod in his suite. It's mania on the ship as crew members run by or try to grab Darrow and Theodora. A thick gray sergeant clears a path for the two as five other grays join in, thinking it's their chance to escape and beating lowColor crewmembers who try to get near them. They get to the suite but there are only 4 seats in the pod. Other colors and an obsidian bust through the suite's door but are gunned down. One gray, Marcel, pulls a gun on Theodora, he says she's a slave and shouldn't get to live. Darrow growls in protest and the thick gray sergeant shoots Marcel in the head, deciding the two seats left will go to the higher ranked.

At the Citadel on Luna, Theodora is met with disdain by the pink stewards there until Theodora sasses the hell out of the them by mentioning Matron Carena, showing she's a Rose and shutting the other pinks up because Theodora is a queen and a boss-ass bitch like that. Later we learn Darrow had Theodora spend half his bank account buying a Stratovarian violin from Quicksilver's auction house for Tactus to make up for the violin Tactus' brothers broke when he was a boy. Tactus just looked at it and sold it later for pinks and drugs, showing Tactus doesn't recupriate Darrow's friendship. Theodora wants to go with Darrow and Victra to the Lost City on Luna to meet the Jackal but Darrow won't let her. Before the Gala, Theodora brings Darrow his suit, but for the first time ever makes a mistake and knocks over a glass of wine. Darrow sees terror in her eyes as she dishes out apologies. Darrow puts a comforting hand on her shoulder and she begins to cry, seeming like she can sense what's about to happen in the air.

After Darrow meets with the Sovereign and the Oracle he is worried that Theodora along with Victra and Tactus will perish by Praetorian death squads.

During Iron Gold, she works in the Republic Intelligence Bureau and is Virginia au Augustus's spymaster. In Dark Age, she is tried and executed for treason by the People's Tribunal.

She is publicly executed by a riot of Vox Populi which is instigated by disguised Boneriders like Lilath au Faran during the coup of Mustang as Sovereign. 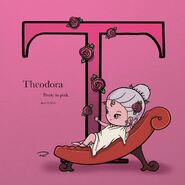 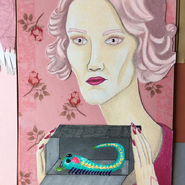 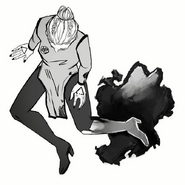