Thraxa is in her mid-thirties, with "wild gold hair" garlanded with white feathers given to her by Obsidian admirers, and a freckled, bluff face. She is stoutly built with thighs thick as water drums. She has a metal prototype left arm made out of unpolished asteroid metal after losing her real one in battle with Atalantia au Grimmus. Her left arm is covered in Obsidian runes etched by Valdir after she saved his life during skirmishes at the Bay of Bengal. [1] 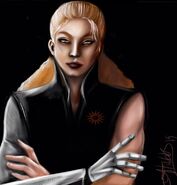 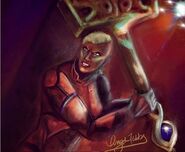 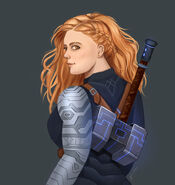