This article lists the chronology of the main events in the Red Rising Saga. It is a continual Work-in-progress. 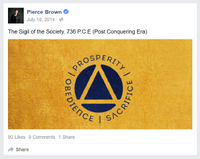 There are only approximate clues as to the time relationship between the era portrayed in the novel and the current Anno Domini era in real time. Due to the number of inhabitable planets and planet moons, it is clear that there is likely an established common time scale used across all of the Solar System. Based on Darrow's own narration in Chapter 40 of Red Rising, Earth reckoning is used for all dates noted across all novels. This is also supported by the use of Earth-time terminologies (a "day" instead of a Martian "sol"), as well as the fact that the highest government of the Society (the Sovereign) is based on Luna (Earth's moon).

Based on Pierce Brown's own discretion, the beginning of the first novel takes place in 736 PCE (Post Conquering Era) in the Society[1] This system is confirmed in the fourth novel Iron Gold chapters 6 and 18, where Ephraim's age and birth year are noted and setting the year as 753 PCE.

According to Darrow and many of the other characters, Mankind began colonizing planets and enslaving Reds about 700 years prior to his era. There are also references made by several characters to wars before and during this period.

Certain details about the passage of time that are mentioned in Golden Son are changed in later novels. For the purposes of editing the timeline page, please refer to the most consistent versions: