The Pacific's Most Famous Martyr

Trigg ti Nakamura was a Gray Legionnaire in Legio XIII Dracones. Born in Goodhope, South Pacifica, he was the younger brother of Holiday ti Nakamura and engaged to Ephraim ti Horn. He was a member of the Sons of Ares and aided in Darrow's escape from Adrius' Prison in Attica. He was speared and thrown off the mountainside by Aja au Grimmus before reinforcements for Darrow's escape could arrive.

Darrow describes Trigg to have a lopsided smile and a boyish face.

Note: Years are based on the Unofficial Red Rising Wiki Timeline.

Trigg travels to a bar South of Hyperion City Center, decorated in tiki torches. He orders a glass of spiked milk, which after taking a drink from, accidentally spills it down the back of the neck of another Gray. The Gray, Ephraim, turns around to punch him, but instead starts laughing at Trigg's milk mustache and wide, apologetic eyes. They sat and talked until the bar closed down for the night.

His platoon was sent to raid a Pink breeding facility known as the Hysperia Gardens as part of a coordinated purge by Octavia against reformers in the Society government. Without the Grays' knowledge, their standard combat stimulants were replaced with Zoladone to ensure they would comply with every order they were given. With their empathy suppressed by the drug, he and his unit butchered men, women, and children whose only crime was possessing compromising information about key members of Octavia’s regime. After the killing was done, he and his squad melted the remains with acid.

When the effects of the Zoladone wore off, he was horrified by what he had done and attempted suicide. His sister Holiday stopped him, and convinced him to join the Sons of Ares as a means of atonement for the blood on his hands.[1]

After gaining evidence of Darrow still being alive, acting leader of the Sons of Ares, Sevro au Barca, sends Trigg and Holiday to reveal their loyalty to The Rising and rescue Darrow from being transported to Luna for dissection.

A monument depicting Trigg holding a shield over Darrow's cowering body is constructed in Attica on the landing pad where he was killed. Donations are placed at the base of the statue; lit candles, flowers, baubles, and seashells and other totems of South Pacifica. 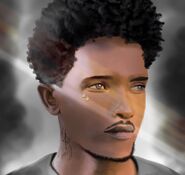 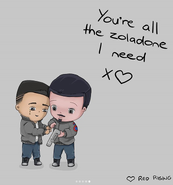 Retrieved from "https://red-rising.fandom.com/wiki/Trigg_ti_Nakamura?oldid=19624"
Community content is available under CC-BY-SA unless otherwise noted.