Darrow
Valdir the Unshorn is a character introduced in Dark Age in Ephraim ti Horn's narrative. He is an Obsidian warlord who served Darrow and is a Royal Concubine of Sefi the Quiet. He is considered Darrow's greatest armored cavalry commander. He is also known as "Big Brother" by the other Obsidian, and "The Sky Bastard" by the Golds.

Valdir is called 'Unshorn' because his tail of valor was never shorn, he always won his battles, his valor was untouched.

He was fought alongside Ragnar Volarus and was with him when Darrow handed the Obsidians razors to them.

According to Ephraim he is the only other person to have survived a duel with the Minotaur. It is said that he also fought alongside Vagnar Pale Horse for House Grimmus.

He is described as having delicate facial features, though his cheeks are gaunt and patterned with freckles, with his nose having been broken twice. His bones are considered avian in structure. He has flecks of silver in the irises of his black eyes and full, notched lips. Ephraim also notes his "batwing ears."[1]

He has a deep love and respect for Darrow, as they fought together on Mars against the Fear Knight and the Minotaur. He was also among Ragnar Volarus' trustees, so he was considered to be trustworthy.

He understands having honor and being honored, as was shown by his show of gratitude to Thraxa au Telemanus when she saved his life during a skirmish at the Bay of Bengal, and he etched Obsidian runes over her metal arm.

Sefi mentions him as being honest and proud, while Ephraim considers him a thinking monster. According to Pax, Valdir is not a good teacher, resorting to yelling as a means to being understood. Freihild was also a student of Valdir's.

Valdir also is the type to wear his emotions on his sleeve, as Ephraim has often noted Valdir's attitude towards specific characters throughout the book, which he does not hide, or does not hide as well as he should.

Though he is not mentioned in Iron Gold, it's likely he was with Sefi's troops during siege of Mercury, and though he would've stayed to help Darrow battle on, by order of Sefi, he parted with Darrow and went with the rest of the Obsidian to Mars.

When Ephraim, Pax, and Electra are confined in the Obsidians establishment in Olympia, and Ephraim attempts to escape, Valdir captures him immediately after Ephraim makes his way down from Eagle Rest, using Sefi's griffin Godeater to return from where he escaped. He shows his dislike towards Ozgard for his inability to keep Ephraim from escaping.

During Electra and Pax's sparring challenge with the Obsidian children, it is only Valdir who seems to approve of Pax's method of winning his match, which was met with disapproval by everyone else.

Valdir's relationship with Freihild is first hinted at he passes by her on his way to meet Sefi to bring Ephraim to her. He then later shows his disapproval towards Ephraim for his drug addiction. However, when it comes to Xenophon the White, he shows trust.

When Sefi asks Ephraim to teach her Skuggi how to be freelancers, Valdir clearly disapproves of this, as he disapproved of when Sefi left Darrow when he asked her to continue on to Venus to fight alongside him.

When Ephraim has the Skuggi challenge each other in cards, several want to challenge Friehild, something that puts a questionable, possibly jealous, look on Valdir's face. During this time, Xenophon explains how Valdir how saved them from Atlas, and Xenophon was able to prove themselves worthy to Sefi.

Aboard the Heart of Venus, Valdir is witness to Amel's execution, and is angry at Sefi for thinking him to be a traitor, assuming it was suggested by Ozgard. When it's revealed that Xenophon told Sefi about Amel, he doesn't argue against Xenophon, but he still doesn't accept it.

When it's time for Sefi's troops to battle for the mines, she forgoes Valdir's plan for Ephraim's. This adds more friction in her relationship with Valdir. He again shows his displeasure when he gives the lowest form of wager in battle honor during a pre-battle ritual. Despite his anger, he and Sefi are successful in overtaking the mines.

During the drake hunt, Valdir allows Ephraim to use a rifle to take down the drake after something goes awry when Sefi tries to kill it. Even after Ephraim is given a necklace of dragon's teeth to make him as a drakeslayer, Valdir doesn't grumble against this like his cohorts do.

During the feast after the drake kill, Valdir, in his drunkenness, can't seem to hide is desire for Freihild, even with Sefi around and observing. When Valdir crosses paths with Ephraim, Ephraim warns him that Sefi knows of his and Freihild's relationship.

After Freihild's death, Valdir shears his hair off to use to bind Freihild's bones together, an act that shows his deep love for her as he had never had his hair shorn before, hence his nickname prior to this, Valdir the Unshorn. Afterwards, during a feast in Freihild's honor, Valdir, in a drunken rage, puts the blame on Sefi for Freihild's death, thinking it was she that killed Freihild in jealousy, and not Volsung Fá. Later, he is found at the griffins' lair, having slaughtered all of them, including Sefi's griffin Godeater. After Valdir is sent off to a cell, Pax has Valdir's azag analyzed and they find that it was spiked with fever cloud mushroom, apparently removing any inhibitions of control.

Due to Ozgard and Ephraim's inability to free Valdir from his imprisonment prior to Volsung Fa's arrival, he was not there to witness Sefi's defeat and death. It is also unknown if Valdir escaped before the slaughter of Olympia, though he was not found. If it is true that he fought alongside Vagnar Pale Horse under service of House Grimmus, it is possible that he would be able to verify whether or not Volsung's claims are true. 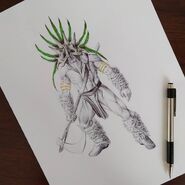