Deputy leader of The Rising

The Sovereign and minions

Victra au Barca (née Victra au Julii) is a Gold of the House Julii, a house known for its famously-powerful (and famously-ruthless) women. Victra is introduced in Golden Son as part of Darrow's retinue and becomes one of his closest friends.

Victra is older than her half-sister Antonia. Antonia's reputation frequently colored peoples' impressions of Victra, a circumstance at which she freely expressed deep frustration.

Victra is a Peerless Scarred. At 2.1 meters tall, she is taller and more heavily-built than her half-sister. She has jagged hair, deep-set eyes, a wide mouth, and many scars. While she typically adorns herself with rings and earrings of Jade, Victra seldom, if ever, wears any sort of makeup. It is often remarked that of the two sisters, Victra more-closely resembles their mother. She doesn't like the color gold, and prefers to wear green because it goes better with her skin.

In Dark Age, she loses her left ear fighting off the Red Hand.

Victra is best known for her blunt honesty. Despite coming from a family of opportunists, Victra is uncharacteristically candid. She is capable of putting on a ruse, but will typically not outright lie, occasionally spilling the beans in direct conflict with the plan.

She is also incredibly loyal, never betraying her friends or the Rising even under torture by The Jackal. Victra's demeanor is generally combative. She abhors things that are gold in color, preferring green.

You meet Victra in this book while she is under Darrow's command at the academy. Throughout this book Victra plays a significant role as one of the main characters. She convinces her mother to turn against the Luneborns and contributes to Darrow's Triumph. At the end of the book when The Jackal, Roque and several others turn against Darrow, Antonia shoots Victra in the back twice, and kills their mother. Victra crawls her way over to Darrow to tell him she had nothing to with it and she didn't know. Then she loses consciousness.

At the beginning of Morning Star, Victra is being held captive and tortured by the Jackal. Once Darrow is set free he doesn't leave until he saves Victra as well with the help of Holiday and Trigg. Victra continues to help Darrow and Sevro along with the rest of The Sons of Ares. Mickey the Carver heals her paralysis so that she and Darrow can return to combat.

Victra, along with Darrow and Holiday, finally earns her wolf cloak! In a hilarious scene with Sevro and his Howlers, Victra goes through an initiation to earn her cloak. First, she gets ambushed while taking a shower and then is forced to eat live snakes and cockroaches drenched in alcohol.

Near the end of the book, Victra and Sevro get married. Even though she has the superior house in Gold circles, Victra takes on Sevro's surname of Barca instead of Sevro taking the Julii name, thus preferring Victra au Barca.

Victra is pregnant with her and Sevro's fourth child, and overdue.

A Brown working for Victra takes Lyria from the Sovereign's Citadel, thinking Lyria was complicit in the kidnapping of her and Sevro's oldest daughter, Electra. Because of this, Lyria is not present at the Forum, where she was to stand witness for Virginia.

Having taken Lyria and Volga from Virginia's citadel, they were not present during the Day of Red Doves. She kept them in separate rooms on the Julii dreadnaught, the Pandora. The day Victra had planned to have them transferred to Ephraim, in exchange for Pax and Electra, is when Volsung Fa and his Ascomanni invade the ship. She is able to escape through her private escape craft, where Lyria and Volga find themselves in as well.

They end up crashing in Cimmeria on Mars and travel together out of necessity. They see Harmony from a distance, and though Volga could've killed her with a sniper shot, Victra says not to, with Lyria agreeing. Victra had been having contractions for days, but it's when her water bursts that she lets the other two know that she's about to give birth. They take over Cormac O'Vadros' home so she can give birth there.

Victra tells Lyria about what happened to Harmony's family and her clan. They had been sick and instead of sending them the vaccine that could've saved them, including Harmony's husband and son, Victra's mother, Agrippina, had orchestrated it that Lyria's clan would be the ones to share the vaccine, which they didn't do. Victra feels it her duty to pay the Julii debt to Harmony.

Victra gives birth, standing up as is tradition for her, either as a Gold or as a Julii, and though she thought it would be another girl, it's a boy and she named him Ulysses. A few hours later, she's forced to flee with her baby when Cormac alerts the Red Hand of their presence. Unfortunately, Harmony and her Red Hand men capture her in the forest and kill Ulysses. They also capture Volga, and beat them both before they ship them off to a Red Hand mine and lock them in cells.

Lyria is able to get to their location and frees Victra, who helps battle the Hand men. During the battle, she is finally able to trap Harmony. After the loss of Ulysses, she no longer has no reason to make up what was done to Harmony's family, and throws her into a pitviper nest.

Victra and Lyria recover Ulysses' body at the fishing town, and she cleans him for his burial. Ulysses' body is buried between Victra's ancestral home and the sea. Per Julii tradition, Victra then goes to the sea and swims away from the shore, towards the setting sun. Though some never turn to see if there's a light for them to return to, Victra returns from the water six hours later.

She claims one debt is now paid, but others are due. She then says an oath to Pax, Electra, Lyria, and Volga that their enemies, their errors, their lives, are hers, and that if ever they call, House Barca will answer.

After Virginia has escaped, after Pax and Electra have returned, Virginia goes to talk to Victra. Victra at first blames Virginia for not aiding Darrow on Mercury and then for Sevro's assumed torture by the Abomination. Though when Virginia shows her scars, which are now more than her own, Victra realizes she cannot blame her for not trying. They agree to try to save their husbands, or avenge them.

Victra served under Darrow at the Academy, where initially Darrow distrusted her and only warmed up to her near the end of their time there together. Victra for her part came to form an affection for Darrow that turned into romantic love, which was obvious to everyone but Darrow. Despite Darrow not returning her feelings, Victra remains loyal to Darrow in Golden Son and fights for him to the best of her ability. She is later captured alongside him and tortured for over a year. Darrow for his part, refuses to leave his captivity when rescuers come unless they save Victra as well. In Morning Star they continue to fight alongside one another, with Victra's feelings for Darrow fading into friendship, as she grows closer to Sevro.

Darrow comes to trust her as one of his best and most loyal lieutenants, and thinks to himself that one day he will tell his son of the loyalty of Victra.

Victra and her younger sister Antonia do not get along well. Antonia's behavior and manner often reflect poorly on Victra, who sometimes pays the price for her sister's vanity and treachery. Antonia shoots her sister in the back and paralyzes her, and revels in her torture when she is imprisoned alongside Darrow. In Morning Star, Victra pays her back in kind by brutally beating Antonia for killing Thistle. Antonia is later killed by Adrius and the Sovereign, though Victra does not mourn her.

They are on reasonably good terms as her mother could be persuaded to betray her allies.

Initially having somewhat of a difficult relationship with him, Sevro and Victra often bickered and argued in Golden Son, with Sevro not fully trusting Victra and Victra finding Sevro to be wild, vulgar, and foolish. However, they form something of a strong partnership as the novel progresses. Sevro helps orchestrate the rescue of Victra and Darrow from the clutches of the Jackal in Morning Star. They grow closer together still as Victra's unrequited love for Darrow fades. After witnessing Sevro's mercy towards Cassius, Victra proposes marriage to him. Despite her family being far senior to Sevro's, she takes on the last name of Barca, finding more honor in Sevro's family than her own. They remain happily married and work together to bring down the Sovereign with Darrow and The Rising.

In Iron Gold, she has three daughters with Sevro. Electra au Barca is the eldest. 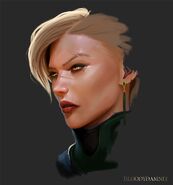 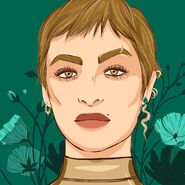 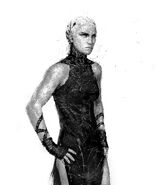